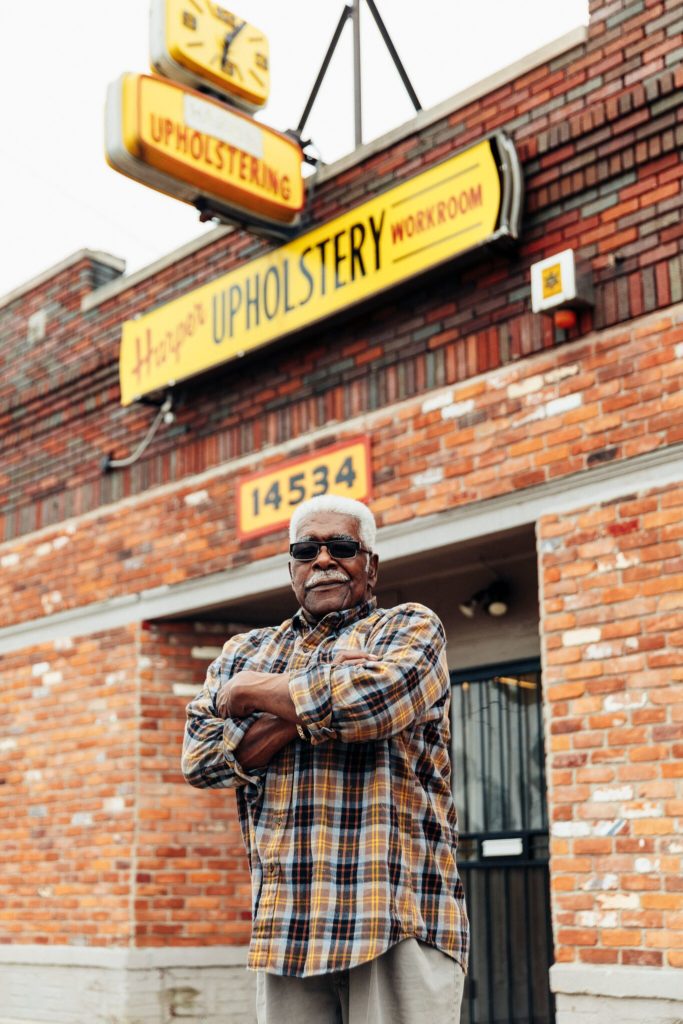 Harper Upholstery Workroom began in 1970 when Edmond A. Hasty’s supervisor had a heartfelt conversation with him regarding his work ethic and superior upholstery skills. The care and detail in which Edmond poured into each piece of furniture showed that he loved what he was doing. This same supervisor encouraged him to become an entrepreneur; 51 years later, Harper Upholstery Workroom has a generational customer base.

We are proud to have had the opportunity to reupholster furniture for the Detroit Institute of Arts, The Fox Theater, Batman and Transformer movies. We are thankful to have built fantastic relationships within the industry which has allowed for these opportunities and more through recommendations from Interior Designers and loyal customers.

Harper has always revolved around community both with our customer relationships and also our employees. We strive to create an environment where employees could give and receive advice and always find a helping hand.

Edmond Hasty was born in Marshville, NC. He graduated from Price High School in 1955 where he was a star football player. He was musically talented, and the trumpet was his choice of instrument providing him the opportunity to join his high school band. The band was talented, and those talents were awarded as they were selected to play during President Eisenhower’s 1953 Inauguration in Washington, DC. During his matriculation at Livingstone College, he majored in Business and pledged Phi Beta Sigma Fraternity, Incorporated. His talents were also seen on the football field, giving him the prestigious title of the 60 minuteman; playing all minutes in each game.

He moved to Detroit, Michigan in 1962 where he began working at Carter Brother’s, a furniture factory and then gaining employment at Famous Furniture. In 1970, Edmond took the advice and accolades from one of the owners of Famous Furniture; that he was the best upholsterer he had ever encountered, and he stepped out on faith and became an successful entrepreneur. Thus, creating his legacy: Harper Upholstery Workroom.

In 2018, he was awarded The Best Eastside Employer Award by The Eastside Community Network. His outstanding athletic abilities afforded him two distinguished awards. In 2008 he was inducted into Price High School Football Hall of Fame. However, the induction into Livingstone College Football Hall of Fame in 2009 was by far one of his greatest notable accomplishments.

Those achievements during his younger years were the results of his activities to contribute to his family’s welfare, but not the goals. The goal was to support his own family and children and that motivation helped him succeed in his life and business. Mr. Edmond A. Hasty transitioned on October 9, 2019, leaving his youngest daughter, Nina Hasty to take the rein. Dr. Nina Hasty, the youngest daughter of the founder is an educator of 26 years with a doctorate in Curriculum and Instruction with a specialization in Literacy. She began working closely with her father in 1997, learning the trade from the master. She continues to take pride in each piece of furniture which Harper Upholstery recreates.

Reach out to us and tell us about your project or opportunity and one of our representatives will be in touch soon!